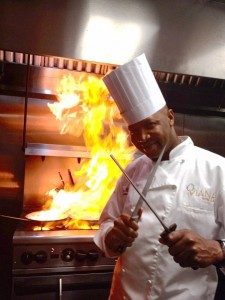 Chef Devon Rhoden has taken his love and passion for the art of food and turned that into a culinary career that has spanned over 20 years. Chef Rhoden attended Hocking College in Ohio partly in thanks to a scholarship he received while working and going to school in his beautiful home country of Jamaica. Rhoden received his degree in the culinary arts then immediately began additional studies at the Huntington Hilton Hotel as the Garmage Chef. Devon’s talents were recognized and he was quickly promoted to head Banquet Chef.

After perfecting his craft, Chef Rhoden then spent the next couple of years working at the Marriot Melville where he was promoted to the Executive Sous Chef. He has also worked in the industry as the Executive Chef of the Islandia Marriot, (under the direction of Takir Rafiq, also his current manager) and as the Assistant Banquet Manager of the Garden City Hotel.

Chef Rhoden’s culinary career continues to move forward as he is now the Executive Chef here at Marco Polo’s Restaurant. His culinary diversity is the inspiration behind the Asian/Italian menu Marco Polo’s Restaurant features. A love for all things Asian has allowed for a seasonal menu that includes not only organic produce but also locally grown food. Chef Rhoden continues to spread his versatility and creativity throughout the kitchen as his unique cuisine speaks for itself.